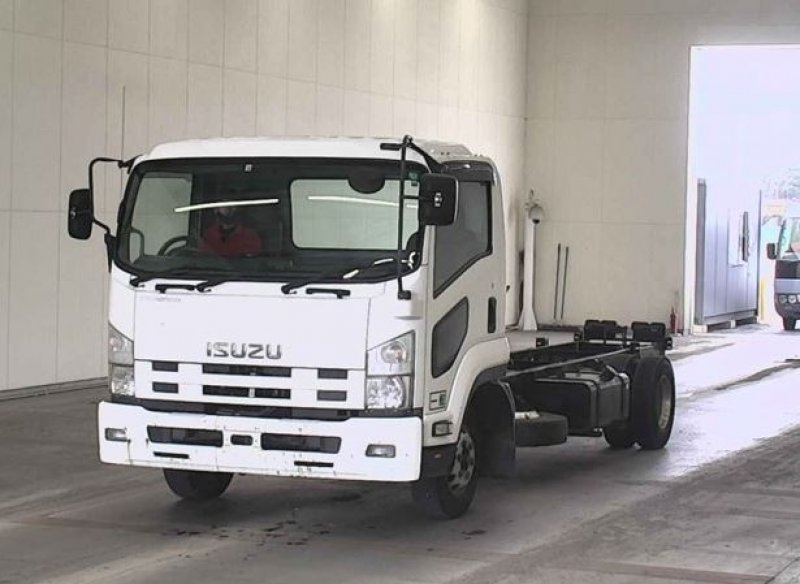 The Isuzu Forward (also known as the Isuzu F-Series) is a line of medium-duty commercial vehicles manufactured by Isuzu since 1970. All F-series trucks are cab over designs and the cabin comes fully built from the factory. Most models come with a diesel engine; but, some markets get CNG derivatives as well. The F-series is available a variety of cab styles, engines, 4WD or 2WD depending on the market it is sold. Most trucks are assembled in Japan; however, they are locally assembled from CKD kits in some countries. Most mid-size and big-size models of the truck are distinguishable by a front 'Forward' badge; but the common Isuzu badge is usually used on the rear. The Isuzu Forward is among the commercial grade trucks used by the Japan Ground Self-Defense Force for rear line duties. In the United States, its principal competitors are Bering MD, Chevrolet W-Series, GMC W-Series, Mitsubishi Fuso FK and the UD 2000/2300. In Japan, its main competitors are Mitsubishi Fuso Fighter, Nissan Diesel/UD Trucks Condor, Hino Ranger. For the Chilean and Peruvian markets, the trucks were shipped from Japan as CKD kits to Huechuraba, Chile, where up to 2 a day can be assembled by a team of 13 workers. They were badged as Chevrolets, and GMCs until 2009. On June 10, 2008, GM Chile announced its 20,000th Isuzu truck assembled in its Huechuraba plant (including N and F series).
Calculate FreightX
Detail
Stock No.
21-0107-436
Model No
PKG-FRR90T2
Vehicle Grade
-
Transmission
F6
Exterior Color
WHITE
Interior Color
GRAY
CC
5190
Doors / Seats
2 / 2 seaters Seats
Fuel
Diesel
Mileage(KM)
794740
Dimentions
832cm x 249cm x 327cm(67.744)
FOB: $ 7,900
Exterior Condition
3
Interior Condition
B
Send Inquiry
Contact us
HEAD OFFICE
Address
Qualitex Trading Co. Ltd.
2F, 2-12-5 Izumi Ebina-Shi
Kanagawa-Ken, 243-0437 Japan