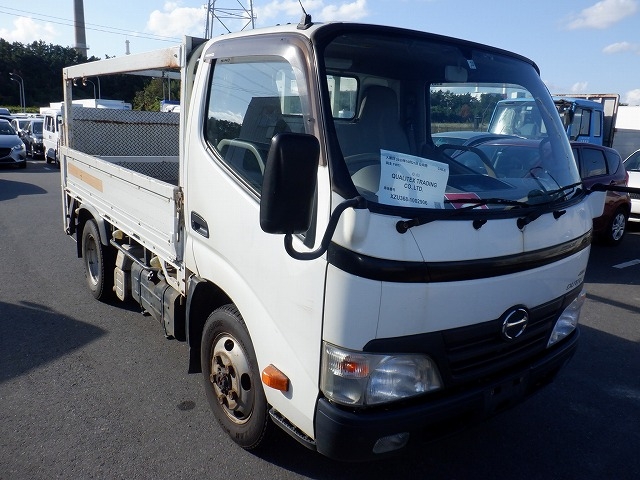 The Hino Dutro is a light commercial truck shared with the Toyota Dyna, manufactured by Hino Motors. Like the Dyna and its twin Toyoace, the Dutro is built on the U300 platform for standard cab, or U400 platform for the wide cab and offered in many different chassis type suitable for different purposes. The Dutro took over from the earlier Ranger 2 (and Ranger 3), a badge-engineered version of Daihatsu's Delta series. Outside of Japan, it is also known as the '300 series'. For export market, the Dutro is sold in Australia, Chile, Colombia, Indonesia, Malaysia, the Philippines, Thailand, Sri Lanka and other countries in Latin America. As of 2008, the Dutro was available in Canada as the 'Hino 155'. Canadian models are built in Woodstock, Ontario from CKD kits imported from Japan. The Andinian and Latin-American models are built in Cota (Cundinamarca), Colombia and in Chile, from CKD kits imported from Japan. In some of these markets, however, the trucks are imported from Japan completely assembled.
Calculate FreightX
Detail
Stock No.
21-0099-263
Model No
BDG-XZU368M
Vehicle Grade
PG
Transmission
F5
Exterior Color
WHITE
Interior Color
GRAY
CC
4000
Doors / Seats
2 / 3 seaters Seats
Fuel
Diesel
Mileage(KM)
267800
Dimentions
468cm x 169cm x 198cm(15.66)
FOB: $ 5,500
Exterior Condition
3.5
Interior Condition
B
Send Inquiry
Contact us
HEAD OFFICE
Address
Qualitex Trading Co. Ltd.
2F, 2-12-5 Izumi Ebina-Shi
Kanagawa-Ken, 243-0437 Japan

A1 :Scratch less than 10cm
This is the user entered information to give information about demage report of car.